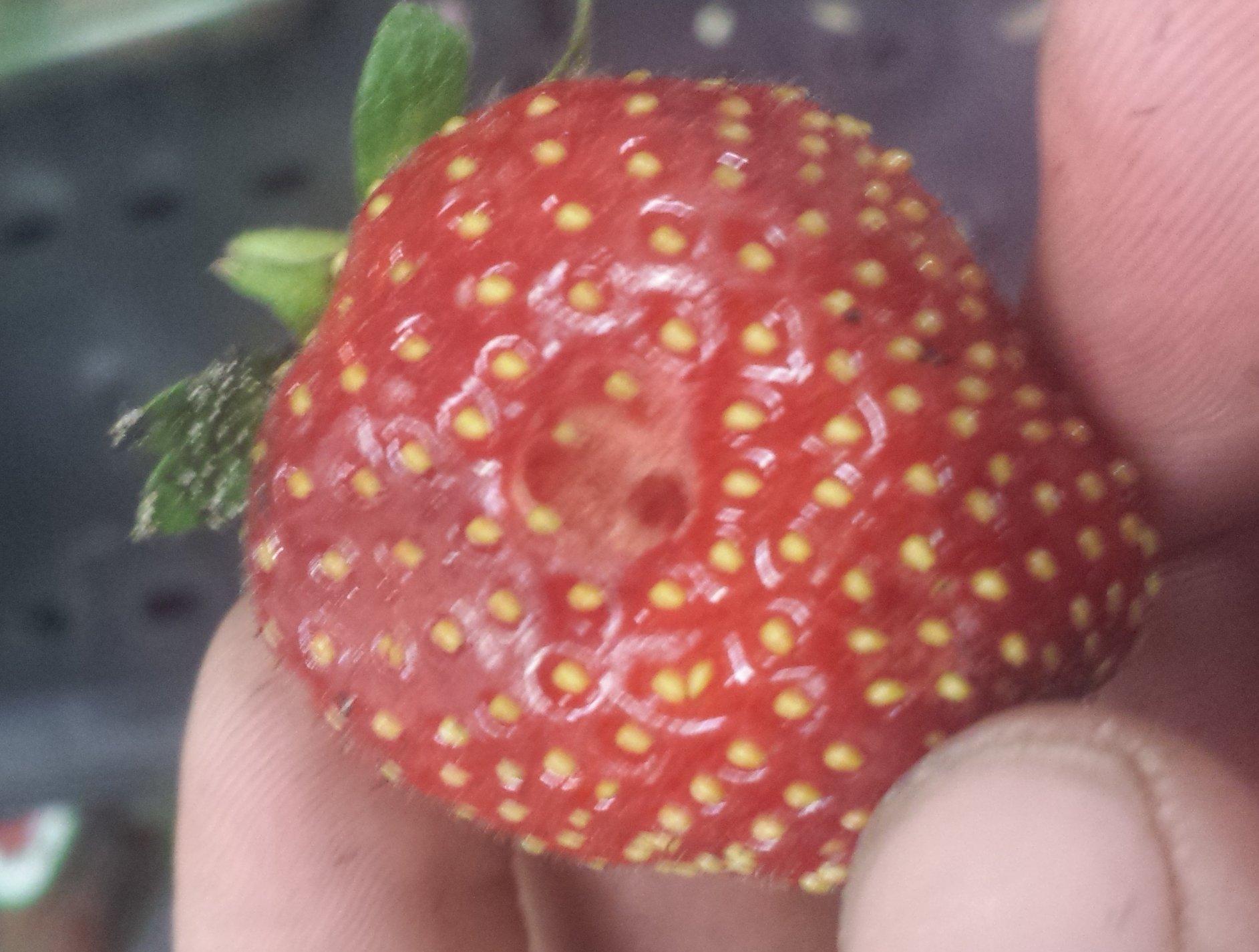 Small, deep round holes in strawberry fruit may be evidence of sap beetle damage (Fig.1). This type of injury may be confused with slug injury.  Occasionally, small dark beetles can be found inside the hole.

Have you seen this damage? We are interested in knowing if the problem is widespread.

Identification: Several species of sap beetles can cause damage to strawberries (Fig 2). These include the common picnic beetle (beer bug), the Strawberry Sap Beetle and the Dusky Sap Beetle. When identifying these beetles an important feature is the presence of knobbed antenna which is common among all sap beetles. The Strawberry Sap Beetle adult is the smallest of the three at about 3mm long, and is irregularly marked with shades of brown. Slightly larger is the Dusky Sap Beetle at just over 3mm in length and dull black. The Picnic Beetle is around 6mm in length with 4 orange spots on its back. Larvae of all three are off- white with three pairs of legs near a brown head (Fig.3).

Habitat and life cycle: Sap Beetles overwinter in woodlands and also around raspberry canes and blueberry bushes. However, they do not appear to overwinter in strawberry fields. Beetles emerge from overwintering sites when strawberries become ripe in the spring and are most active when temperatures are over 16°C.

Feeding occurs mainly on over ripe and damaged berries but Strawberry Sap Beetle damage is also commonly seen on ripe otherwise marketable berries. Eggs are laid in the soil near damaged fruit, but occasionally in partially consumed fruit. This allows the larvae to feed for about one week, after which they return to the soil to pupate and mature into an adult sap beetle. Three weeks after eggs are deposited the beetles are mature.

Damage: Strawberry Sap Beetle adults damage fruit by feeding their way into ripe strawberries leaving a small round hole that may extend deep into the berry. This type of injury may be confused with slug injury if the slime trail left by slugs is not clearly visible. Picnic and Dusky Sap Beetles commonly feed on damaged fruit, although the Dusky Sap Beetle will lay eggs directly into undamaged sweet corn when populations are high. Although Strawberry Sap Beetles are primarily of concern to strawberry growers, this beetle is known to feed and reproduce in cherries, blueberries and raspberries as well.

Management: Sap beetles are difficult to control using insecticides and treatment may be impractical as the beetles feed on berries that are ready for harvest. Some broad-spectrum insecticides used for tarnished plant bug may provide temporary suppression of sap beetles. However, multiple applications of these insecticides could result in reduced populations of beneficials such as wasps that parasitize the strawberry sap beetle, and beneficial mites that feed on spider mites. Sap beetles are best controlled in strawberries by picking all ripe and overripe fruit on a regular basis.  Melons, tomatoes, corn, and apples are hosts to later generations of sap beetles. Cull piles and unmarked fruit from these crops should be well managed to reduce the buildup of overwintering  sap beetle populations.

A good factsheet on sap beetles in strawberries prepared by researchers at  Cornell university  is available at  http://nysipm.cornell.edu/factsheets/berries/ssb.pdf