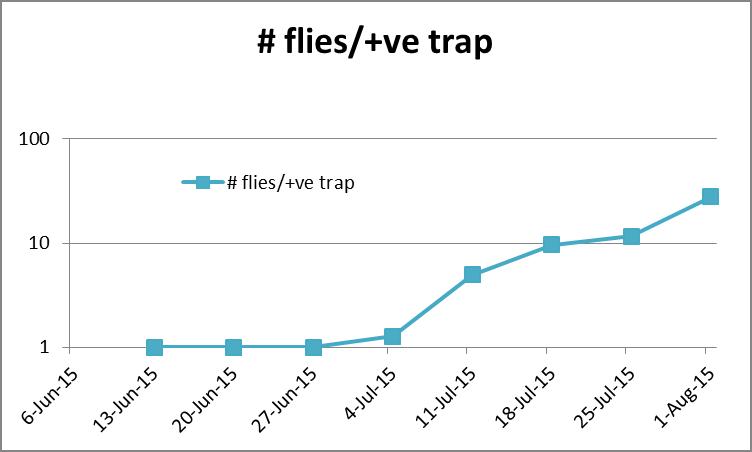 Spotted wing drosophila trap captures continue to escalate. Second generation females are now active in most areas. Using a degree day model developed in Oregon, (which has not been validated in Ontario), we expect another surge of SWD egg laying in the first week of August. All berry crops should be protected from SWD at this time.

Do not take chances with SWD control right now.   The next 5-6 weeks are critical for keeping things under control. Minimize the amount of fruit that is left in the field by picking early, clean and often.

Summer red raspberries: Apply weekly insecticides. Harvest as thoroughly as possible every 2 days. This is difficult given the big crop but it is at risk in all areas!

Fall-bearing raspberries: Strip ripening fruit off the lower parts of the plant until there is enough fruit to harvest every 2 days. Begin a regular insecticide program as primocane fruits begin to ripen.  Do not let SWD build up on the small crop that develops early at the base of the plant.

Blackberries: Where fruit is ripening, begin an aggressive insecticide program and harvest as thoroughly and as often as possible.

Blueberries: Harvest is in progress and fruit is susceptible. Apply a preharvest insecticide to blocks of late varieties green fruit, choosing an insecticide which will also control Japanese beetle. Apply insecticides weekly once fruit begins to ripen. Do not skip these early insecticides, which are critical to keeping populations under control.

June bearing strawberries: Unharvested fruit is now a source of SWD. Mow and renovate as soon as possible. Apply a post harvest insecticide to blocks adjacent to raspberries or blueberries.

All berries and stone fruit crops: Do salt water assessments and close observation to check for SWD damage. http://www.omafra.gov.on.ca/english/crops/facts/swd-saltwater.htm  Juice leaking from fruit indicates a serious problem.  Keep fruit in a cooler, as soon as possible after harvest.

UPDATED: Insecticide recommendations for SWD on all fruit crops can be found at: http://www.omafra.gov.on.ca/english/crops/facts/swd-registrations.htm.