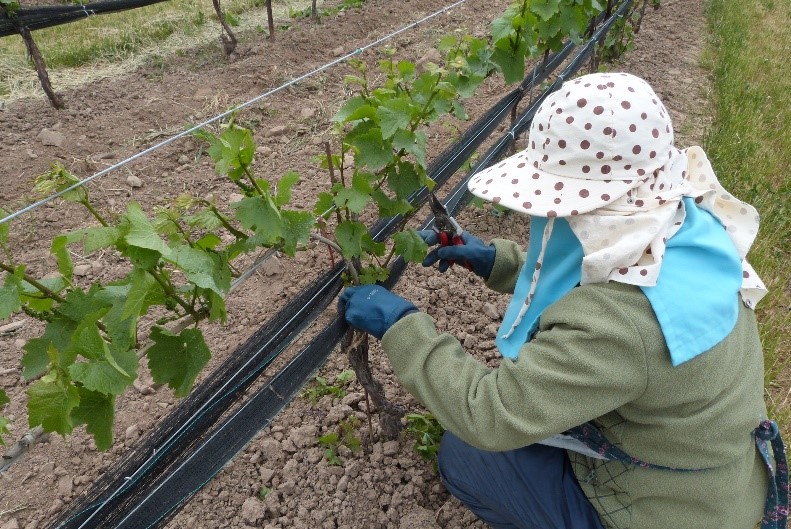 Thinning grapes is the first canopy practice of the growing season. After bud break, the grape vine canopy can become very crowded with excess shoots emerging from latent buds in the cordon in spur trained systems; and unproductive or poorly positioned shoots growing in cane-pruned systems. Shoot thinning reduces the canopy density resulting in:

There are increased costs associated with shoot thinning grapes, so growers must balance the benefits of shoot thinning with the associated costs. The impact of shoot thinning on grape/wine quality appear to be less consistent than the benefits listed above.  Research has shown that berry, must, and wine composition of Pinot noir and Cabernet franc were impacted by shoot thinning, however these differences did not have a significant impact on the sensory attributes (Reynolds et al, 2005). In contrast other researchers have demonstrated that shoot thinning can improve fruit quality and sensory perception for other vinifera cultivars such as Sauvignon blanc (Noar et al., 2002).

With grape hybrids, research suggests that shoot thinning of some hybrid varieties resulted in increased fruit sugar accumulation, but not in others (Morris et al., 2004). While other research found inconsistent results in the impact of shoot thinning on grape and wine quality as determined by Brix, pH, titratable acidity (TA), wine anthocyanin, berry and wine tannin content (Sun et al., 2011). With some grape varieties (particularly hybrids), the costs of shoot thinning may not outweigh the benefits to grape and wine quality, especially for hybrids that do not command a high market value. However, in some cases the benefits of reduced disease pressure that results from shoot thinning may justify the costs.

Shoot thinning is done early in the growing season, when shoots are approximately 5 to 6 “ long (fruitful and non-fruitful shoots can be identified) and are not more than 10-12” long (approximately 10 days apart). Shoot thinning should be timed after the date of last expected frost, so that secondary or non-damaged primary shoots can be retained in the event of a late spring frost.  Avoid shoot thinning before inflorescences are visible (0.8 inch to 4 inches), as doing so may result in increased vigour of the remaining shoots and lateral shoot growth, negating the benefits of shade reduction.  If shoot thinning is performed too late (shoots are longer than 12”), shoots become lignified at the base and are difficult to remove. If late shoot thinning is necessary, pruning shears should be used to reduce the risk of damaging the arm of the vine. It also takes more time to thin longer shoots, resulting in increased labour costs.

Literature suggests that shoot thinning regardless of timing (pre or post bloom) can reduce leaf layer numbers (Reynolds et al. 1994). Thinning after bloom appeared to be superior to early season thinning in terms of leaf layer number, leaf exposure, cluster exposure, and reduction of lateral shoot growth. Delaying shoot thinning has been shown to have positive impacts on canopy microclimate, but these effects are not of a great enough magnitude to influence wine quality (Reynolds et al., 2005).

Grape vine genotype, soil, and climate are all factors influencing vine vigour potential and capacity to ripen a crop. All of these factors, affect the number of shoots to retain at thinning. In addition; the crop load, health of the vine, and markets all play an important role in deciding how many shoots to leave on a vine.

In addition to the number of shoots, the position of the shoots along the cordon is important. Ideally, the shoots retained should be equally spaced to promote a uniform, balanced canopy.

Determining which shoots to remove

Remove weak, non-fruitful shoots especially if they grow in crowded areas of the canopy. Secondary and tertiary shoots can be removed if a primary health shoot has emerged. Remove shoots arising from the trunk which are not retained for renewal wood (i.e. new trunks, canes or cordons).

The future of shoot thinning

Dr. Terry Bates from the Cornell University is studying methods to improve the efficiency of grape production using sensors and digital technologies.  Dr. Bates is using NDVI sensors to map the early shoot growth in a vineyard, and then using sensor data to guide a mechanical shoot thinning machine to remove shoots at different rates depending on the density of the early canopy. This strategy provides the opportunity for growers to reduce their labour costs and adapt their management practices to address the natural variation in the vineyard, rather than managing it as one uniform block. Dr Bates will be providing more information on his research at the Shaulis Symposium and the ASEV-ES annual meeting in Geneva this summer. Visit www.asev-es.org for more information.

Shoot thinning is strongly recommended for vinifera cultivars growing in the Mid-Atlantic region. The only exception may be in vineyards that have low or moderate vigour. Although hybrids are not thinned as heavily, thinning can play an important role in reducing over-cropping.