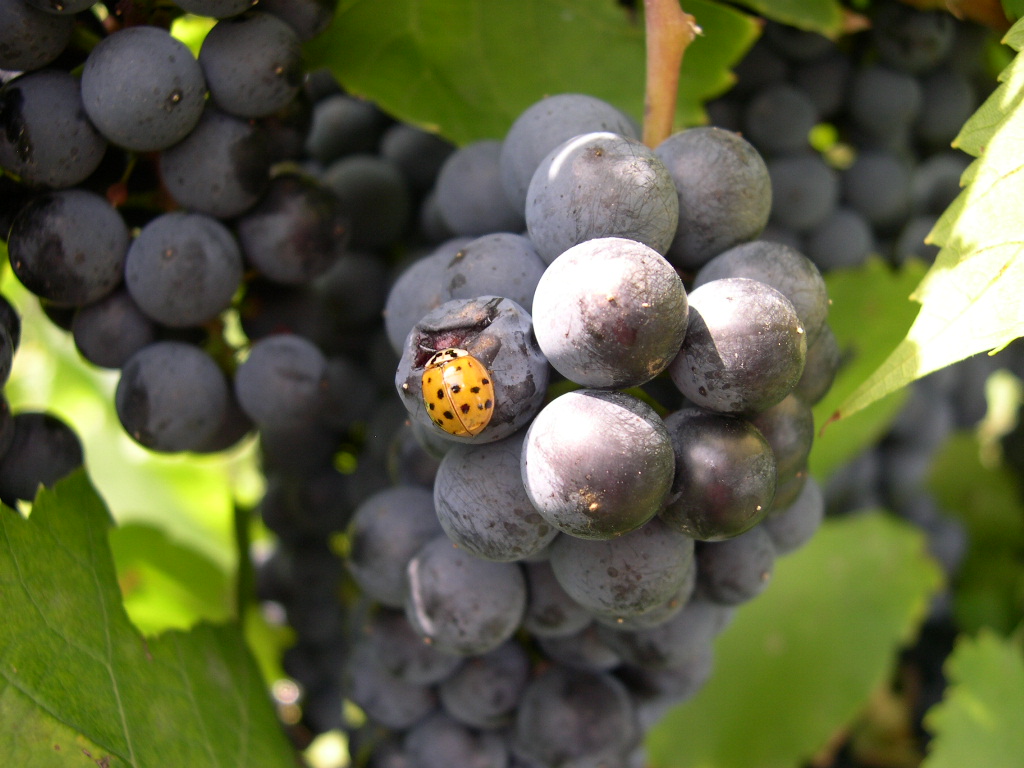 The year started out with unprecedented populations of aphids in many crops.  This was the first hint that MALB might be a problem in vineyards in 2021, as their population cycles with their food source.  MALB has been showing up in borders of vineyards in the past couple weeks and earwigs have been noted in vineyards and bins of harvested fruit as well.

MALB protects itself from predators through the presence of alkaloids that it can secrete to repel potential enemies such as birds and other insect feeders. The secretion is referred to as “reflex bleeding” and is a defensive response. MALB force some haemolymph (blood) that contains these alkaloids from the joints of its legs. Reflex bleeding produces a smell described as rancid peanut butter and produces an undesirable taste to most predators (and humans). This substance, 2-isopropyl-3-methoxypyrazine (IPMP), causes peanut, bell pepper, asparagus, and earthy/herbaceous aromas and flavors in wines, “ladybug taint”, and can mask or reduce the varietal fruit characteristics of the wine.

Earwigs are also generalist predators and are active mostly at night. They like to hide in dark places, like the centres of grape clusters. When disturbed or crushed during vinification, they may release 2-methyl-1,4-benzoquinone and 2-ethyl-1,4-benzoquinone into the must, which give a smoky aroma and other off flavours in wine.

A threshold of 200-400 MALB per tonne of fruit has been suggested. MALB that are dead for 3 days or more do not result in taint, whereas live MALB or those dead for only 1 day may result in taint. However, many processors have much lower thresholds so please contact your buyer/processor directly to determine if controls are required to meet buyer needs.

In a study conducted on Chasselas and Pinot noir in Switzerland, researchers found the following:

MALB population density increases as the incidence of berry injury, due to other causes, increases.  Protect berries by avoiding splitting (physiological/water stress) or damage by birds or insects such as grape berry moth, wasps and spotted wing drosophila. Varieties with tight clusters may have a higher percentage of splitting, and will usually attract more lady beetles.

Malathion and permethrin (UP-Cyde) have been shown to decrease populations of both MALB and earwigs.

In the past Mako and Ripcord were listed for MALB control in Publication 360. While these products are no longer being sold, they are still labeled for MALB in grapes so if you have them in your spray shed, they can still be used. For both products, the rate is 150 ml/ha with 2 applications and 6 day PHI for hand harvest and 3 applications and 2 day PHI for machine harvest.

Spinosad (Success or Entrust) was shown to be very effective in reducing earwig population especially when applied at night.

It is especially important to take into consideration the pre-harvest interval when considering a spray program for these insects. As always, make sure to read the label before using any pesticide.  It should also be kept in mind that while not as intense as with live beetles, dead MALB can still taint wine between 3-6 days post mortem.

Because MALB and earwigs tend to hide inside clusters during cool nights, some growers use the strategy of spraying at night so that the MALB are exposed to residues when they emerge the next day. A similar approach seems most effective for earwigs.

In research funded through the Grape and Wine science cluster held by the Canadian Grapevine Certification Network – Réseau canadien de certification de la vigne, 2018-2020, several botanical extracts showed promise in lab and field trials.  Unfortunately, MALB populations were not high enough to validate all of these products in vineyards.  In lab trials, carvacrol (a component of oregano oil), Timorex Gold, pine oil, and granite dust were highly effective and reduced the number of the beetles on grapes by more than 80%. Timorex Gold, potassium metabisulfite, basil oil, granite dust, and Ecotrol EC decreased in repellency from 24 to 72 hours.  Pine oil was the most repellent compound, and it remained consistently repellent over the 72-hour test period in the lab.  Not all of the products that were repellent in the lab were tested in the field because MALB populations haven’t been high enough to be able to test them. In field trials in 2018, KMS at 10 g/L consistently reduced the number of MALB on grapevines 24 h after application.  Buran, Biobenton (bentonite) and Sulfobenton (bentonite plus sulphite salts) had efficacy as well. While none of the alternatives were as effective as cypermethrin (Ripcord/Mako/UP-Cyde), if the number of beetles in a vineyard exceeds the established sensory detection threshold, a repellant could drive them to disperse and reduce the number of beetles below the threshold level.

Shaker tables are effective at separating MALB from the fruit, thus preventing extraction of MPs from the beetles during grape processing. The shaking motion forces beetles through the mesh into a collection and disposal area below.

Some new harvesters offer an optional destemmer that separates the berries from the stems, roller sorting tables and an air cushion that blows out any Material other than grapes (MOG), including MALB and earwigs.

Optical sorters employ a combination of destemmers, shaker tables and high-speed cameras and image-processing software to quickly scan and sort destemmed grapes to remove almost all MOG, including MALB and earwigs.

From the vineyard to the winery

MALB can rapidly move into harvested clean fruit in open-top bins in the field or at the winery.  Ensuring a tightly fitting lid that is not removed until sampling at the winery will prevent MALB from contaminating loads of fruit.

There’s no point in spraying for MALB or earwigs until harvest. So far numbers of MALB and earwigs have not reached the thresholds listed above. There are only so many insecticide applications allowed and the residual is no more than 7 days and you may just be wasting money. There’s also no guarantee that MALB or earwigs will end up with high enough numbers in vineyards to justify spraying. It’s a waiting game until just before harvest but best to be aware that the problem might flare up and keep monitoring.

0 comments on “Bugs in your bunches: Keep an eye out for Multi-coloured Asian Ladybeetle (MALB) and earwigs in vineyards at harvest”